Leaving Michigan was difficult, but we have a long ways to go until we are back in Oregon. After spending several days exploring the areas around Holland and Grand Rapids we have grown to love the state, it is full of delicious craft beer and beautiful scenery. Saying goodbye to Allison and her wonderful family we hit the road again, with Colorado in our sights.

This next leg of the trip was going to be interesting; we had a lot of prairie to cross and we didn’t know what to expect. When we would tell people of our plans, most everyone told us that the drive through the Midwest would be the most boring and desolate part of the trip. And while it is definitely a change from being in the mountains we found ourselves enjoying the drive, there is a lot of beauty in the patchwork of farmland that makes up the heartland of America. Leaving Holland on Friday morning we quickly found ourselves cruising through Indiana and Illinois, once we got out of the Chicago area we drove on through countless miles of corn and soybeans.

Our stopping place for the night was another Wal-Mart parking lot, in Hannibal, Missouri. We discovered that Hannibal is where Mark Twain grew up; there were a lot of buildings and stores in the area with Tom Sawyer themed names. Unfortunately by the time we arrived there wasn’t much time left in the day to explore the area, so we contented ourselves by making some dinner and watching a movie on the computer. Parking overnight at Wal-Mart sure isn’t the most romantic place to camp, but they actually work out pretty well. We haven’t been bothered by anyone yet, and there’s always a quiet corner of the lot to park in.

Getting back on the road in the morning we headed across Missouri, the big straight highways inspired Lindsey to take a turn at the wheel, the first time she has driven the bus so far. She did a great job, and drove for almost 2 hours while I got to lounge around and relax. It is an interesting experience to hangout in the bus while it is in motion, it was pretty fun to sit at the table and work on the computer while she drove. I was also able to pay more attention to the funny looks we get from other people on the road, it is interesting to see all the different expressions on peoples faces when they pass us.

Crossing into Kansas we noticed more wheat fields along the road, and lots of interesting old farm buildings. We pulled off the highway onto a dusty county road in Randall and followed directions out into the prairie, where we found Roger and Jan’s house and shop, where we would be spending the night. Once we had the bus settled and plugged into the barn, we sat and talked with the couple for a while. They live in a buried concrete home they built themselves in the early 80’s, the entire roof, sides, and back side of the house are buried under a large dirt hill with grass growing and vent pipes sticking up. Their reasoning behind the interesting construction was to keep it extremely energy efficient, and to provide a safe shelter from the occasional tornado that comes through the area. The foot thick concrete walls and several feet or earth really make for a good insulator, we walked in from the oppressive summer heat to find the house cool and comfortable.

Roger then took us out on a little tour of their farm, his family has been farming the same area since the late 1800’s, although now they have 2000 acres of corn, soybeans, wheat, and milo, instead of the ~160 they started with. We got to see the original homestead, with the home built in 1878 still in use by Roger’s son. Listening to Roger made us realize how adaptive you must be to stay in farming for so long. His family used to make their money hog farming, until Tyson came in and monopolized the industry. Changes like that, as well as massive changes in technology keep farmers on their toes. It’s a constantly evolving environment.

Also on their property are several abandoned buildings and homesteads, the most interesting one is an old school house, built in the late 1800’s and used into the 1950’s. It is still standing, although very run down. Roger’s mother actually used to teach there, and he himself had some schooling in it. He said that back in the day, all the kids lived within 2.5 miles and would walk or ride their horses to school. Grades 1 through 8 were taught at the same time, with about 20 students total. It was an amazing time capsule to walk through, making sure to avoid the rotten floorboards and rusty metal. This building would make such an interesting bar or restaurant, our minds were full of ideas.

To cap off the day, Lindsey and I climbed up to the top of the 120ft tall grain leg, a giant grain-sorting tower. It provided some spectacular views, it was a clear day and the land is so flat that you could see for miles. It was a great place to take photos from while the wind pushed us around. We enjoyed a peaceful night sleeping next to the wheat fields, after a quick breakfast we were back on the road, headed for Colorado. 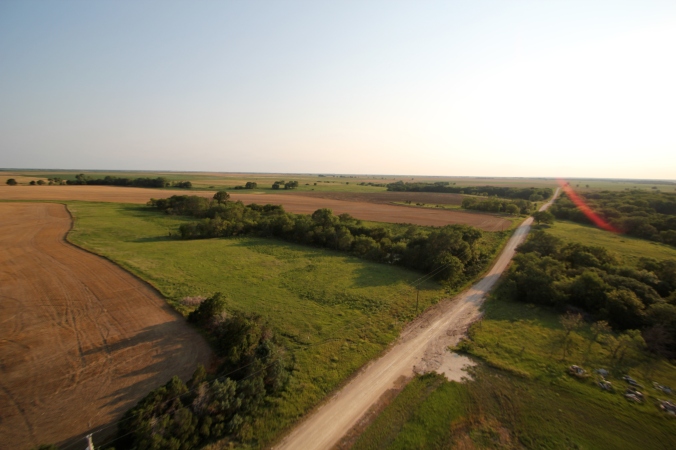 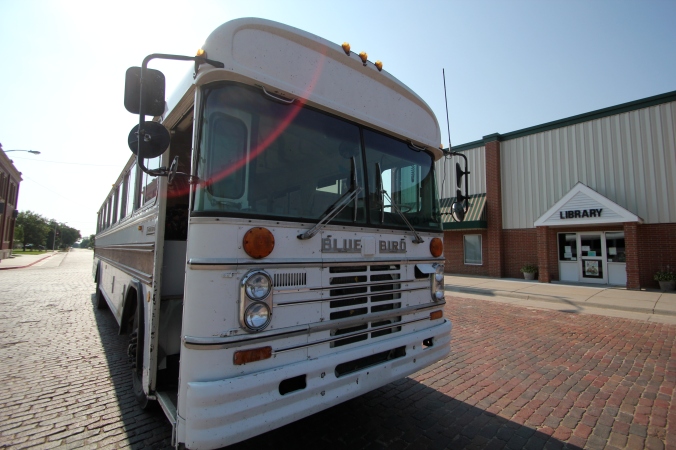